Often times the law does not reflect academic results. This is especially true when it comes to mental disorders and issues of psychology. A big area that the law doesn't seem to recognize or understand fully seems to be the idea of human sexuality. Human sexuality is complex, and our understanding of it ever growing, but it seems difficult for the law to keep up with developments in the academic fields. 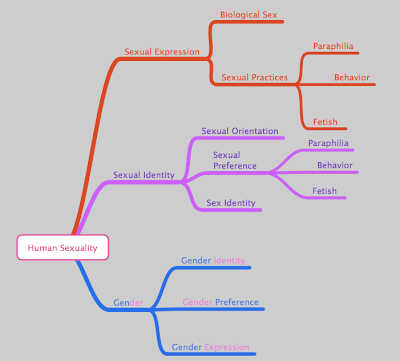 Sexuality is first broken down into three main categories:
Sexual Identity, which constitutes one's inner feelings about themselves in relation to others and even their bodies. It incorporates the biological aspect of sex, but also things around intercourse.
Sexual Expression, is similar to identity in that it also incorporates biological sex and intercourse, but as the name implies it is more about how such things are expressed. It seems to be a more physical whereas sexual identity is more internalized and metaphysical, and has to do with self association.
And then Gender. Gender has to do with ones social role and social identities.

Each of these categories are part of sexuality as they have to do with how you relate to yourself and others sexually, as well as your sexual desires and actions. Each aspect can be broken down into other aspects that address such desires and relations more specifically.


Sexual Identity can be broken into 4 different categories. One of the first that is easily recognizable is sexual orientation, which refers to the sex of the person one is attracted to. This is not that simple though. It refers not only to the object of one's attraction/desires but also refers to one's own sex, which is itself another category. Sexual orientation is derived from the sex of the object in relation to the person who is doing the objectifying. It can be broken into many categories but the main ones that come to mind and that are legally recognized are heterosexual and homosexual. Others include bisexual, asexual, pansexual, etc.

A quick review just incase you've never heard of these other forms. Bisexual  is being attracted to both males and females. There is some conflict within the movement about this but that is the simplest and easiest way to understand it if you don't yet. Asexual's are those who have no (or very little) sexual desire's. This does not mean that they can't or don't have sex but that they don't have a need or want per se to have sex. Pansexuals identify as being attracted to people of any sex, including those who are intersex, or transitioning their sex, or any variation thereof.

Another category under 'sex' is sex identity. While one may have a biological sex that is determined by many things, a person may not identify with that sex, for whatever reason. This often may go hand in hand with not identifying with assigned gender but this need not be the case. Sex identity refers to the labels of male and female, and how a person relates to these labels and the associated characteristics. A person may be biologically male, but identify more as a female. They may feel that the characteristics that constitute female more accurately describe their being, or for any other reason identify as more of the opposite sex to their own. It is important to note that sex identity is not necessarily limited to male or female (eg. intersex persons).

The most basic category is just behavior, or 'normal behavior. This encompasses just what is considered 'everyday sex'. This can refer to position during sex, or dominance in sex, or desire for speech etc. The main two categories are paraphilia and fetish. These two categories are still highly debated even in the academic field and many times definitions seem interlocking. In the current usage it seems that a both refer to specific acts, that are generally considered non-normative that provide sexual arousal or stimulation. It seems to be the case that in psychology a fetish has these aspects and is non harmful. In other words it causes no distress or other mental/physical harm. A paraphilia seems to be what a fetish is called when it becomes harmful. There are proposals for the DSM V to change the definition and diagnostic criteria of a paraphilia, from a subwork group specifically geared toward the diagnosis of paraphilias. These may also change the academic and clinical definitions of what constitutes a fetish as well.

The next big branch of sexuality is sexual expression. Sexual expression has to do with the physical aspects of one's sex an sexual practices. The first category one would probably think of under this is biological sex. A person's biological sex refers to their biology and physical anatomy. In other words, your sex is determined by what "parts" you have, or even some people go as far to say one's sex is what chromosomes make up their DNA code. The difference between this and a person's gender is that their gender is not predicated on anything biological, or even physical. Gender is a social construct that is entirely separate from one's sex, and will be discussed more later in this article. But, for example someone can be biologically male, but be a woman. Woman and man as categories are defined by certain social characteristics like "toughness", or empathy. Even things like how a person dresses or does their hair, or talks, or walks encompass what is gender.

In the law such things are starting to be more and more recognized, at least in the most basic form. The Equality Act of 2010 allows for the recognition of gender reassignment. There are flaws in that it still recognizes gender and sex as essentially connected. The law states that one has the characteristic of gender reassignment if "the person is proposing to undergo, is undergoing or has undergone a process (or part of a process) for the purpose of reassigning the person's sex by changing physiological or other attributes of sex." This makes that one must want or intend to have a sex change in order to have their gender reassigned, which implies some sort of connection. However, as many prominent academics have noted gender and sex are not necessarily related. Many transgender people do not wish to remove or change their sex. They may wish to adjust some of their physical characteristics to fit into their desired gender better, like breast reduction because men with "moobs" are ridiculed and not considered "real men". Such a change though doesn't mean that they necessarily want a penis or that they want hormones to help grow facial hair etc. It can vary from person to person.

The final large branch of human sexuality is gender. Gender for many people is confusing. Many like to think of it as the same as sex. Academics, and the law, are increasingly recognizing the difference. Sex as stated above has to do with one's physical aspects/characteristics. Gender is socially constructed. Gender refers to categories of people and the behaviors and ways people should relate to those categories. Gender theorists break gender into two main categories: Gender Identity and Gender Expression.

Similar to above, gender identity has to do with how one internalizes their gender or how an individual relates to gender categories and labels. These categories as pushed by society have historically been seen as a binary. But as more and more people start to recognize these social boxes, and realize they don't fit or identify with the box people have created and assigned to them. These realizations have led to the 'creation', I would say realization, of the possibility of changing genders and even the possibility of there being more than two genders. This has allowed for a plethora of new gender identities to start to emerge including; gender nonconforming, genderqueer, agender, transgender, gender fuck, gender fluid, and many more.