Justice Kennedy and the Future for LGBTQ Rights and the Courts

Since 1996, with the Romer v. Evans decision, LGBTQ rights in the United States have expanded significantly — from protecting private sexual relations to ensuring marriage equality. It has taken many years, but the Courts have slowly started to recognize the humanity and equal dignity of LGBTQ persons. The pro-LGBTQ court decisions are indebted to Justice Anthony Kennedy's jurisprudence, who has written the majority opinion in every major LGBTQ decision. Kennedy, over the years, has developed a legal narrative around and about the dignity and equal status of LGBTQ persons and their lives. With announcement of his retirement, we should be wary of what the highest Court of the land will have in store for us going forward.

I'm back! And since it's been roughly 2 years since my last post I thought it was time to bring this blog back to life.

No, I'm not actually in Canada - I'm here in New Jersey still trudging along. Like everyone else, my life is consumed by work, relationships, and well... life. Donald J. Trump is President of the United States and here I am still living my life as normal - or at least what has now become normal.

I Can't Handle a Trump Presidency

So the US primaries have been going on for quite some time now, but I've been avoiding them pretty much at all costs. With many debates having already happened, we're getting down to the final stretch and soon enough we shall have our nominees from each respective party. For myself and many others that means its time to start coming to terms with who 'the people' have chosen to represent themselves and start thinking further into the future about what it means should they be elected. Thats why there's recently been a surge in articles about Americans fleeing to Canada should Trump actually become president.

I have an admission to make. I am one of those people. And its not something I say lightly. To many it may seem like a joke - as if many of us wouldn't actually leave or aren't serious about following through but its true. I, and many other people, don't want to live in an America where Trump or anyone like him is able to come into power.

Madeleine Albright, Gloria Steinem, and The Problem with White Feminism

It shouldn't depress me as much as it does, but I'm somehow always more disappointed when people who share my name do stupid things. Madeleine Albright and Gloria Steinem stepped up this week to talk about feminism and how it relates to Democratic hopeful Hillary Clinton. Which is something that needs to be said, for all that Senator Bernie Sanders the sort of guy who practices what he preaches, he also has the benefit of being able to do so. Because he is a
white man, he has privileges others don't.

7 Lessons We Need to Learn from Amber Amour 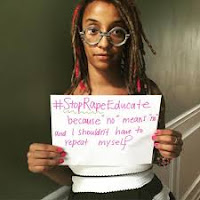 I think it's fairly non-controversial to say that rape victims deserve justice and respect. I've previously written about how we need to start changing the conversation surrounding rape victims and how they need to be recognized for their strength rather than seen as weak. Rape victims are not weak. They are amazingly strong and nobody I know proves that more than my friend Amber Amour. Amber, a rape victim herself, started a non-profit to help raise awareness and support for girls who have been raped. She started the  #StopRapeEducate campaign where she has run workshops around the world educating people about the realities of rape and how to support victims, all the while raising awareness through her street chalk projects.

How to Be An Ally

Fear of being wrong is one of the main factors that prevents people from being even halfway decent allies, they're just so overwhelmed with the fact that they may be called out for not being perfect that they don't even bother to help their fellow humans. I will freely admit that being an ally - to any group - is tough because it forces you to examine your own privilege. You are an Ally because you are a member of the privileged class who has decided to stand up for the marginalized. That means that you benefit from privilege. Even if you are a member of one marginalized group, no person exists in a vacuum. I'm an asexual, disabled woman and yeah the last part is hard for me to admit, but I'm also white and from an affluent family which makes me pretty damn privileged despite the non-hetero, disabled portion of my existence. I benefit from "benevolent sexism" all the damn time because of my whiteness and cisgendered-ness. Just because benevolent sexism is also sexist behavior, that doesn't mean I don't benefit from it.

Is The Purple-Red Scale A Better Way To Come Out?

In honor of National Coming Out Day I thought I'd write about a new method thats been surging around the internet for identifying your sexual orientation. For anyone who is even remotely familiar with the study of sexuality, the name "Kinsey" should ring a bell. For anyone unfamiliar with it, Alfred Kinsey is credited with being one of the first people to study human sexuality and create a scale to measure it. After conducting countless interviews, he came up with what is now called the Kinsey scale. Although, originally the scale only applied to sexual experiences and not desires, it was easily adapted to allow people to plot their orientation on a number scale going from 0 to 6 with 0 being exclusively heterosexual and 6 being exclusively homosexual.